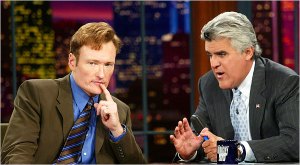 Coco would have been cuckoo to not have taken the $33 million NBC offered him to end his contract with the network and his short tenure as host of The Tonight Show. An additional $12 million will go to Conan “Coco” O’Brien’s staff, many of whom relocated to Los Angeles last summer.

“In the end, Conan was appreciative of the steps NBC made to take care of his staff and crew, and decided to supplement the severance they were getting out of his own pocket,” his manager, Gavin Polone, told The Wall Street Journal.

As the dust settles, it is good to see that O’Brien and Leno, both millionaires, kept the well-being of their shows’ staff and crew foremost in their negotiations with NBC.

Leno said one of the reasons he agreed to launch the ill-fated “Jay Leno Show” was to keep his 175-member staff employed. O’Brien could have taken NBC’s money and ran. Instead, he stopped to consider his staff, many of whom he’s worked with for years.

Hey Wall Street tycoons: This is how business should be done.

“If that person in the mirror is gone tomorrow, everything is going to change for somebody. A whole lot of people are going to miss you. YOU MATTER.” ~Sheryl Lee Ralph